The Weeks After Code School

or How to stay focused

Since returning to my home near Dallas, I have been working hard to stay busy. This is fairly easy to do with four children in the house! A glimpse into my post-code school adventure follows…

Back in June I attended a meetup called “Social Coding” (my very first meetup!). It meets at nod (noddfw dot com) - the North Dallas coworking space on Preston Road. There I met Chirag, who runs the place. Turns out, not only is he a fellow drummer, but his first drum teacher was my best friend Chris from middle school/high school. Small world! After that, my schedule became too full to attend. I was in Austin for code school and coming home each weekend for maximum family time. I got back over there the Friday before Thanksgiving and met even more cool people. I am excited to help out on the project that they are doing!

I also spent a day working at The Iron Yard-Dallas with campus director Caitlin. She is working out of the Dallas Entrepreneur Center, a coworking space in the West End area of downtown Dallas, while they are getting a bigger campus area organized. Working with her was extremely helpful. I was having writer’s block about getting a cover letter written. My versions kept sounding like I copied it off of Google, despite my best efforts. Travis from the The Iron Yard-Austin campus also gave me some helpful hints. These people are brilliant and go out of their way to help out.

The next day I attended a coffee club meetup in the heart of downtown Dallas. Being downtown two days in a row is enough to make you feel like a grownup! I met several cool people at this meet up that work for the city, work for themselves, work for other code schools, build robots, make startup businesses welcome in downtown - it was a good time. I will attend again.

The week of Thanksgiving came at a good time. I was able to hang out with the kiddos and give them my full attention. I also managed to keep my GitHub streak alive, but just barely! It helped that a couple of coding sessions spilled over past midnight - that counts as two days! I know that stimulus of the coding streak is a bit superficial, but, hey, anything helps! 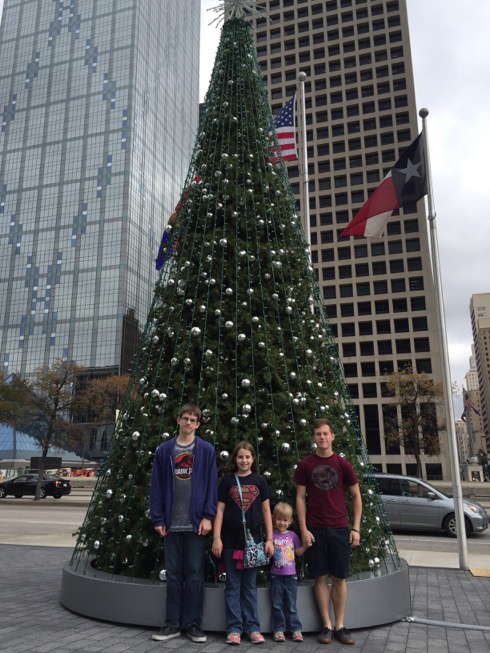 We did manage to get away to downtown Dallas as a family. Melissa and I were lamenting that we had never gone downtown much to just hang out. Our remedy - take the train downtown and just wander around. It was a fun experience. Downtown Dallas is really nice!

I have applied to several jobs and have even more in the backlog for further research. In the meantime, I am learning some Angular.js and updating some old projects. I also made a repository on GitHub with as many of our class’s whiteboarding examples as I could find in my notes. This is a good resource of things we did at the whiteboard in front of other humans. I am also going to be updating my drumr app (narrator: “he didn’t”) from my final project to reflect many of the features that I wanted to include but were outside of the scope of my two-week timeframe in early November.

I have learned so many new things recently, and my list of people and places to find help continues to grow. Things are looking good for a life-long learner like me. It has been a good month!